One of the (many) things we're doing in preparation for our big trip to Disney World is to have a Disney Family Night about once a month until we leave . In short, we pick one of our favorite Disney movies and then create a themed night around it. It's a fun way to bridge the long wait! 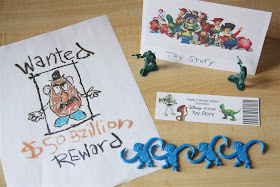 Toy Story is one of my favorite Disney-Pixar movies, and it's a classic in my book. I remember being amazed by how fluid and life like the images were. And I'm a huge Tom Hanks fan, too. Anyway... we had such a fun night with this theme. Here's what we did:

To set the tone, I printed out some posters from here and here, and I arrange various books and toys around the room. We happen to have a Mr. Potato Head, some green army men, an Etch-A-Sketch, and a Barrel of Monkeys on hand. We also had the soundtrack to Toy Story (the 1st) playing in the background. 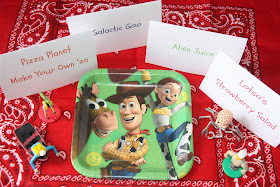 We prepared dinner together - here's what was on our menu:
:: Make Your Own Planet Pizza - I bought mini Biboli crusts and set out a variety of toppings for us to make our own pizzas. James loved this and said, "Finally, I can make my pizza the way I like it!" which meant adding about 100 pepperonis to his pie. (Mommy vetoed 95 of them.)
:: Lotso's Strawberry Salad - this one is a family favorite. Baby arugula, blue cheese, candied pecans, and strawberries, topped with balsamic vinegar dressing. Y-U-M.
:: Galatic Goo - this was our dessert. It was purple grape jello with star sprinkles on top. Ridiculously easy to make and a HUGE hit with James!
:: Alien Juice - this was our beverage. Crystal Lite lemonade made with sparkling water and a few drops of green food coloring (to give it that alien color). :) 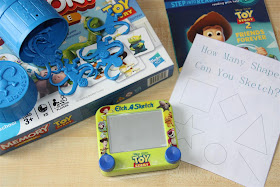 While the pizzas were baking, we played a few games. James received a Toy Story memory game as a birthday present, so we played a short round of that as well as a few turns of "Find the Moon Rocks". For that game I placed a chocolate Hershey's Kiss inside a small piece of tin foil and then gently crumpled it up to resemble a moon rock. I hid these around the house and James went in search of them. :) I also created an activity with the Etch-A-Sketch where we all took turns trying to make certain shapes. James and his dad also made chains out of the monkeys from our Barrel of Monkeys. 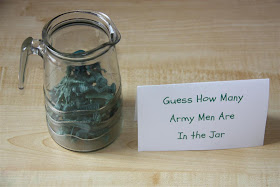 I also put together this little guessing game - "Guess How Many Army Men Are In the Jar?" James took one look and - no joke - guessed the correct number within 1. Even my sweet Hubs was off by 5! 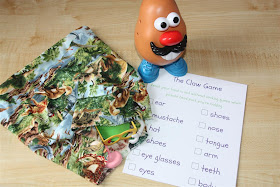 Our favorite game was "The Claw Game". I assembled a mystery bag full of Mr. Potato Head parts and created a checklist to go along with it. James had to reach his "claw" inside the bag and without looking, guess which piece he was holding. He checked off the pieces as he went along and afterwards created a finished Mr. Potato Head. Let me know if you're interested in the printable I made for this game - I'm happy to share it!

We didn't use these resources, but I ran across them while planning this night. I thought maybe some of you might like to use them: Toy Story Pre-K Pack & Toy Store Fun Book. And of course there are TONS of ideas on Pinterest and DisBoards.
At the end of each Disney night, James randomly selects the next theme from a basket. Coming up: 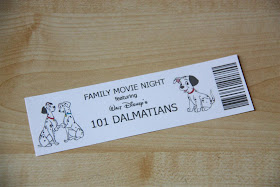 ~Thank you for your comments!~
Counting Coconuts at 7:30 AM

Thanks for stopping by my blog!
I appreciate your comments so much - after all, comments are what make the blog world go around!
Just a reminder: I moderate all comments before they're published, so if you don't see your comment appear right away, that's why!
Cheers, Mari-Ann :)