Several of you suggested I make a Wizard of Oz sensory tub, and since that happens to be one of my favorite movies, I was totally up for it! 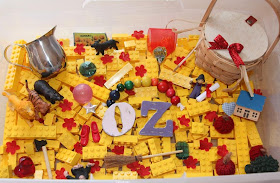 I only used things I had on hand already (meaning I didn't spend any money on making this tub) and so I had to be a bit creative as a result (meaning some of things in this tub are a bit of a stretch). :)

Here's what's inside:
:: The Yellow Brick Road - yellow Lego bricks. Perfect for my Lego lovin' boy!
:: Poppies - red fabric flowers. Yes, I know these aren't what actual poppies look like. :)
:: Lion(s), Tiger(s), and Bear(s) - one each from our Toob collection.
:: Apples - I made these little knitted apples myself. They, along with the tree in the lower right hand corner, remind me of the scene where Dorothy and the Scarecrow get into a row with the apple trees.
:: OZ - two chipboard letters.
:: Emeralds from Emerald City - a few plastic "gems".
:: Over the Rainbow - colored wooden beads on a string. Surprisingly, James likes this the best! Initially, I thought about making this a lacing activity, but I knew James wouldn't really enjoy that. I spaced the beads out enough that they move a bit on the string, which makes the whole thing really nice to hold. Sort of meditative.

Things to represent Dorothy:
:: Basket - just a cute little basket I found at the thrift store.
:: Toto - a black dog. I didn't have a Terrier on hand, but this Labrador works just fine. :)
:: Farm house - a small wooden house.
:: Heart - I was excited to find this little heart in Dorothy's gingham pattern! It represents the whole "home is where the heart is" theme of the movie.
:: Ruby slippers - I couldn't believe it when I found these Barbie shoes in our toy collection. Years ago, before I had children, I was a nanny and a frequent babysitter. I bought and kept a stash of toys at my house for whenever those kiddos came over. :)
:: Hair bow - I would like to have made two gingham hair bows (one for each of Dorothy's braids) but I didn't have that sort of ribbon on hand. So, glittery red (like the ruby slippers) was the next best thing!
:: Kansas - a puzzle piece from our USA puzzle.

Things to represent the Tinman:
:: The oil can - just a tin cup with a handle. Perfect for scooping, collecting, and pouring all the little things in the tub.
:: Axe - this is from our "x" language box.
:: Heart - one of the small glass hearts used during our Valentine's Day theme.

Things to represent the Scarecrow:
:: Scarecrow - the same small scarecrow button we used in our harvest sensory tub.
:: Hay (Scarecrow's stuffing) - pieces of raffia.
:: Diploma from the Wizard - a tiny piece of paper that has THD written on it, rolled up, and tied with a teeny tiny piece of ribbon. I was racking my brain (ha!) trying to think of what I could use to represent Scarecrow's brain. I remembered the Wizard gave Scarecrow a diploma and in that scene he bestowed the degree of THD (Doctorate of Thinkology) upon him. :)

Things to represent the Lion:
:: Lion - from the lions, tigers, and bears trio as noted above
:: Medal of Courage - like I said, I had to use what I had on hand, and this one really threw me for a challenge! I used a piece of red ribbon and a little lapel pin James received from VSB camp.

Things to represent the witches:
:: Glenda's floating orb - you know, the one she floats down in when she arrives in Munchkin Land. I used a pink reusable ice cube ball thingy.
:: Star from Glenda's wand - a little silver star made of fabric.
:: Wicked Witch's Broom - another item from one of our language boxes.
:: Flying monkey - just a little monkey from our Toob collection. I thought about adding tiny wings to him, but decided against it. 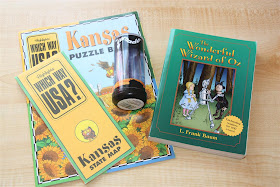 James is 5 now, but he still very much enjoys sensory tubs. However, now that he is a bit older, I've been including some theme-related educational materials to accompany our tubs. For example, for this tub I gathered the Kansas magazine and map from our Which Way USA collection. I also added the Wizard of Oz book, which we've been reading nightly, and "Pet Tornado" - this thing is really cool, you swirl it around and it creates a little tornado inside the container. James loves it!
~Thank you for your comments!~
Counting Coconuts at 3:45 PM

Thanks for stopping by my blog!
I appreciate your comments so much - after all, comments are what make the blog world go around!
Just a reminder: I moderate all comments before they're published, so if you don't see your comment appear right away, that's why!
Cheers, Mari-Ann :)